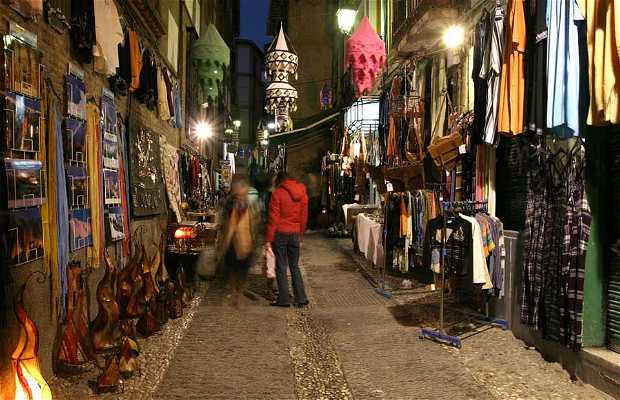 You'll fancy it after the silence of the Cathedral

The whole area near the Cathedral of Granada is now called la Alcaicería. It is made up of beautiful streets full of craft, spice and incense stands. It reminds one of an Arab bazaar, and it used to be one actually, where silk used to be made and sold. Alcaicería literally means "Cesar's house" or "belonging to Cesar" in recognition of Emperor Justinian who granted the Moors permission to sell silk.

Traditionally, these bazaars were located in the centre of the city, with taverns where traders could stay, and with gates in all entrances to avoid looting and that would close at night. A few vigilantes patrolled the alleyways within the bazaar. During the night of July 19th 1843, there was a fire in one of the stores were they made matches in Mesones street and the entire original bazaar was reduced to ashes. Soon afterwards, it was rebuilt but the bazaar would never become as important as it was.

A Walk through the Alcaicería of Granada

"al-Kaysar-ia", "Cesar's place". One of the places that do not go unnoticed, whether to buy some souvenirs of the visit or for its historical interest.

It used to be called "the silk Market", the principal activity of the period. It is located on Bib-Rambla square, in the historical district of the city. It survived until the 19th century when it was destroyed by a fire. A replica replaced it, much smaller and in the neo-Moorish style of the time, occupying only a part of the original space.

A walk through the "Moorish neighbourhood" is unavoidable in Granada. We found an atmosphere of shops looking like a "labyrinth" and in which without a doubt we enjoyed appreciating “the painted ceramics known as Fajalauza, the inlaid wood or marquetry and the coloured glass lanterns."

Lists and places related to Alcaiceria

Links to Alcaiceria
Hotels near Alcaiceria Flea Markets in Granada
See something odd?