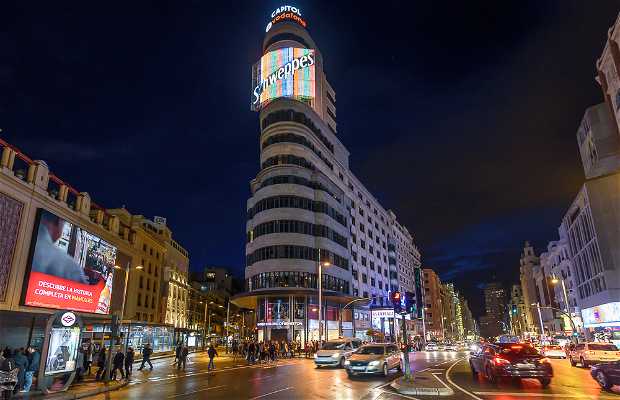 Plaza de Callao or Callao Square is one of the most central and busiest squares in the entire city of Madrid since it is crossed by Gran Vía. Personally, it is one of my favorite squares in the capital, since the buildings have a great personality and are influenced by American architecture, more precisely Chicago and New York. A good example is the Cinema Building Callao, of 1929, copying the style of the American school of Chicago.

One of my favorite buildings in Madrid is on this square, the Capitol building, better known as the "Schweppes Logo" building, since it has on its facade a huge neon with the drink brand, which also appears in some Spanish movies scenes like the famous "El Día de la Bestia".

One of the classics of the city

"Callao", as the Madrileños call it, is one of the classic places in the city. Located right in the middle of Gran Vía, very close to Sol, it is one of the places where people usually meet before having drinks, going to the cinema, the theater, shopping, etc.. The square itself does not have much charm. Actually, you can almost say it is not a square. But the place is worth it.

Sol might be the heart of Madrid, but a little North, right in Gran Vía, you have the arteries of the city. Memorable for the great number of passers-by all year long, Callao Square is also one of the most recognizable and commercial spots of all in Madrid.