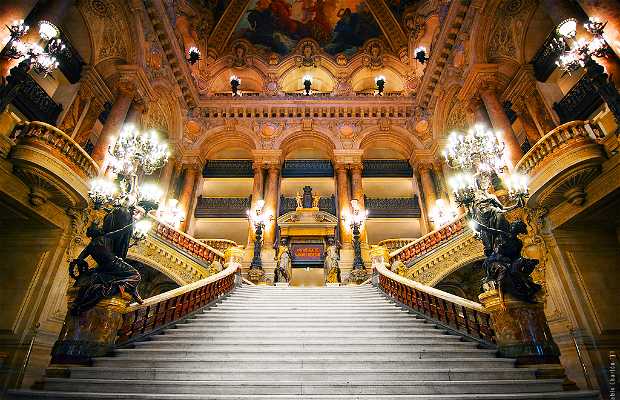 The outside of the building is wonderful, but the most impressive part is inside. The grand staircase is impressive, so is the museum library, hallways, the pylon of the witch, the great hall, and the Rotundas of the Sun and Moon. You can access the balcony and have a complete view of the square.

Paris has two opera houses: Palais Garnier and the Bastille. It is true, however, that the word "opera" in Paris evokes images of the former, older venue,but the reality is that the latter tends to offer a more opera performances.

I was excited to go see a performance at the Palais Garnier, so I bought tickets for the ballet "The Lady of the Camellias". If I remember correctly, third-row seats were around 30 something euros (very cheap) and the view was excellent.

It was an amazing experience; not just the ballet itself, but exploring the buildings, stairs and salons during intermission....it left me speechless! Every corner has a secret to discover.

This opulent building was built for Napoleon III in 1862 and designed by Charles Garnier. It has a really striking and recognizable look thanks to its mix of materials like stone, marble and bronze, as well as styles ranging from classical to baroque, and countless columns, frescos, and sculptures.

After several interruptions (including war), the Palais Garnier was finally opened in 1875. It was originally home to both the opera and Paris Ballet, one of the best dance companies in the world, but is now almost exclusively dedicated to dance after the Bastille opened in 1989.