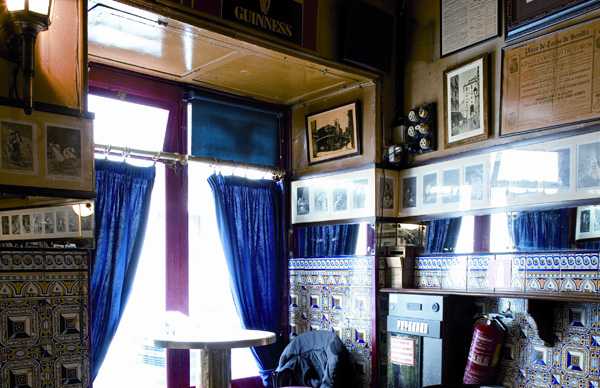 The Spanish Omelette is one of the best, a fact confirmed in the 5th National Spanish Omelette Contest. It’s golden on the outside but gloriously gooey on the inside.
It’s best to get there early, no later than 1 or 1:30pm and, if possible, during the week. There are less people and you’re guaranteed to get a pincho (they make a limited number of these generous portions and they go quickly).
I recommend you complement your omelette with an expertly poured caña of beer from the oldest Guinness tap in Madrid.
A pincho (1/5 of a Spanish omelette) + 1 large caña comes to 6.14 euros.

La Ardosa is a typical neighborhood establishment. I first got to know it during the interminable nights of the Movida Madrileña, and ever since, a pint of Guinness or PilsnerUrquell, a fantastic salmorejo, and a portion of one of the best Spanish omelettes in the city has been, for me, the perfect treat.

The Best Guinness in Madrid

This tavern has been operating on Colón Street since 1892, although the La Ardosa that we know today originated in 1970 when it was bought by Gregorio Monje and his wife, the couple who gave this establishment its current brew-pub vibe. In a Spain more used to grapes than hops, where the norm is ordering a caña without considering the brand, the Monje family brought this country’s first Budweiser, PilsnerUrquell, and, La Ardosa’s specialty, Guinness.
La Ardosa has a clear distinction: it was the first tavern in Madrid that imported foreign beers. The Spanish omelettes are also worth a prize of their own.