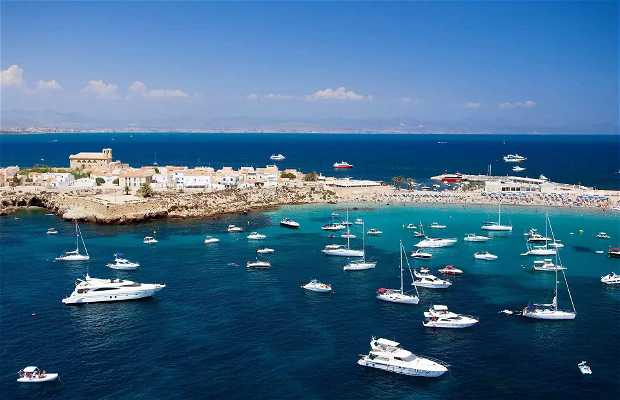 Tabarca Island was my favorite part of my trip to the southern part of the Alicante region of the Costa Blanca. The beaches in Alicante follow a general rule (in my opinion, at least): if you can reach them easily, they're not very good. In other words, the easy beaches are jam packed and overdeveloped, and the pristine hidden coves are on dirt roads outside the city. If you want that same virgen-beach feel but are traveling (like me) without a car, I'd recommend hopping one of the "Tabarquera" boats that leave from Santa Pola marina (15euros round trip) and heading to Isla de Tabarca.

Tabarca is a small island divided into two sections, a maritime village and a nature reserve, with a pleasant sandy beach and some restaurants occupying the middle part. This beach, while probably the most beautiful on the island, was packed when we went (as occurs in July and August). But, you can head to the natural side of the island and find some peaceful, uncrowded coves with sparkling emerald water, plenty of fish, and some neat little islands you can swim out to and explore. If you head towards the natural side of the island on the right side (the side towards the ocean, not the mainland), you'll find the most accessible coves about 50-100meters down. On the other side (the side that faces the mainland), the coves are rockier and more shallow, but also less crowded. In fact, there was only one other couple there with us, which says a lot considering that the main beach was crowded as hell.

Refuge on the White Coast

An authentic surprise and a completely essential stop if you’re traveling along the White Coast. It’s not everyday you find a place like this. A tiny island that has been populated for hundreds of years. A refuge where the habitants still conserve their ancestral Italian last names, as they historically came from there and decided to stay on the tiny island.

You can only access the island by boat. It's really is worth taking the ferry from the nearby Santa Pola. Once there, you can walk around the precious streets, have a snack or drink from one of the many stands in the summer, and take

Although it technically belongs to Alicante, Tabarca is one of the classic get away destinations for those in the area, as a ferry can be taken there from Santa Pola, just 20 minutes away from Elche.

Tabarca is a natural paradise. You can walk from one side of this small island to the other in just a little over 30 minutes. There’s a small beach with crystal clear water, coves and places perfect for scuba diving and snorkeling. Like any touristic island, the restaurants are somewhat expensive, but you can always bring your own lunch, umbrella and set up your own picnic. Make sure to keep the price of the two-way ferry from Santa Pola in mind. It would be somewhat of a joke to call the three houses in the center downtown, but they do have some merchants in the summer.

Tabarca is a Mediterranean island located off Santa Pola, in Alicante. Its subtropical waters attract many scuba divers, as it's nice and clear and has precious coves. Half of the island hasn’t been populated or developed (it was declared a marine reserve in 1986). The town of Tabarca makes up the other half of the island. It’s a walled town that was constructed in the 18th century by the habitants of Tabargah (in Tunisia).

You can spend various days on the island, as there’s plenty of hotels, restaurants and stores.

+15
Like
Have you been here?
Add your opinion and photos and help other travelers discover