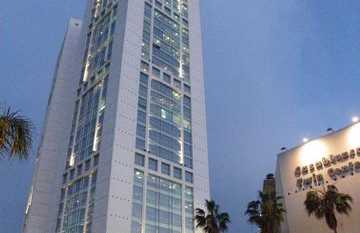 Casablanca has its twin towers, which you'll find on the corner between Zerktoni Blvd. and Massira el Khadra. Being more than 100 meters tall, the Twin Center dominates Casablanca, and around them there's a modern neighborhood, with luxury shops and well-known brands. The left tower is a hotel, while the right tower is rented out as office spaces. It's a little strange, because the towers are reminiscent of the ones that were in New York. I don't know the year they were made, but its looks like it was after 9/11.
It's easy to find this place, everyone knows where it is, and it's perfect for meeting someone who's just arrived.