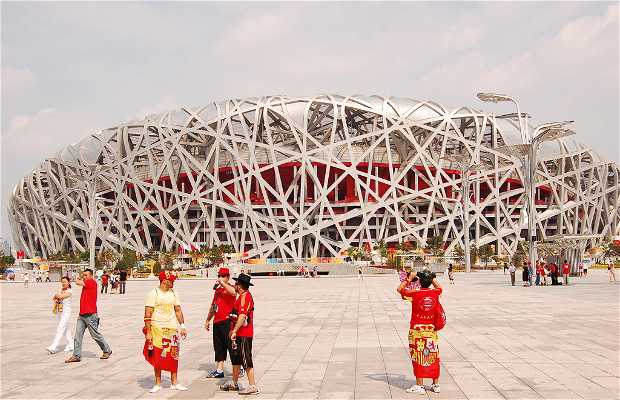 It is the main area of ​​the celebration of the 2008 Beijing Olympic Games and is now one of the most emblematic places of the city. It is located to the north, and is easily accessible by metro. I recommend going at sunset to see it lit, but beware that you aren´t too late because I think at 21 or 22 they close the premises. Here you can see great works of modern architectures such as the Water Cube Beijing Olympic Stadium, better known as the nest.

most emblematic buildings of the Olympics

The Beijing National Stadium (better known as the Bird's Nest) is one of the most emblematic buildings of the Olympics. The unusual shape is similar to a large lit up nest, that's made up of several interlocking strips, functioning as structure and design as well. It's in the Olympic Village, and the location of 2008 Olympic Games opening and closing ceremonies. With a ticket you can visit the stadium. At night it's lit up for a few hours, but not as much as it used to be in 2008

When you go there, see all the Olympic Park!

Unusual structure, for ve is interested in architecture is a “must”.