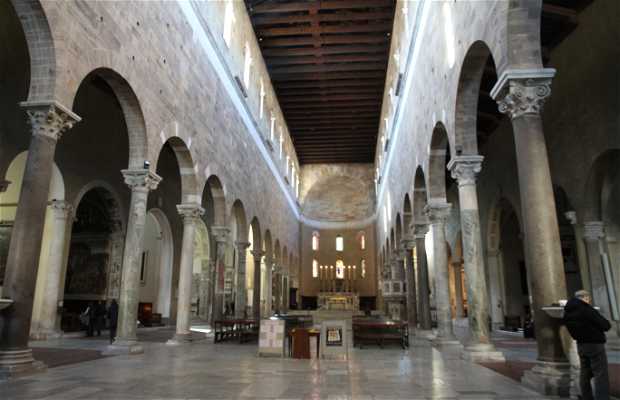 29 photos of Basilica of San Frediano

9 reviews of Basilica of San Frediano

One of the oldest churches in the city

This is one of the oldest churches in the city and was built on top of another 6th century church consecrated by the bishop of Lucca, Frediano and dedicated to San Vicente. When the bishop died, he was buried here and it was renamed San Frediano and San Vicente. The outer walls are built with white marble stones taken from the Roman amphitheater near the basilica, and is decorated with a large Byzantine style 13th-century golden mosaic by Berlinghieri Berlinghiero representing the Ascension of Christ. Inside the church is a basilica with a large room and two separated aisles held up by columns with Roman and Romanesque capitals.

Austere Romanesque church from then XII century that was built on a sixth-century basilica. It is largely covered with white stone from a nearby amphitheater. In the center of the doorway a beautiful mosaic highlights Byzantine air of XIII century, the work done by local artists. Like other churches in the city, it has a graceful bell tower. The interior has the same austere appearance, although it has some archaeological features of interest: the beautiful capitals are likely from the Roman amphitheater. There is also a beautiful baptismal font with scenes from the life of Moses.

Lists and places related to Basilica of San Frediano

Information about Basilica of San Frediano