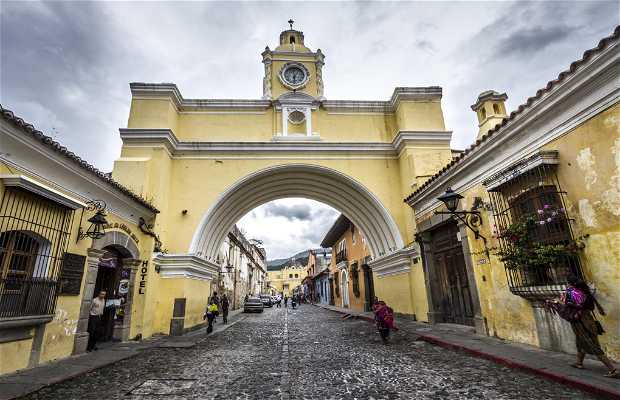 Magic is in the background of Antigua

El Arco de Santa Catalina is the symbol of Antigua. Constructed in the year 1649 for the nuns of the Convent of Mercy Nuetra, it was reconstructed along with the clock tower in the 19th century after the earthquakes before. One can not leave Antigua without going through this Arc many times without photograph as many. Its charm lies in something indescribable: the mixture of red ocher and the backdrop-2 volcanoes-the lights at night, the cobblestone street. It is a symbol of the city of Antigua: you can have a thousand reasons to like Antigua, but the magic is in the background of all of them.

The Arco de Santa Catalina is one of the most famous sites for visitors to see in Antigua Guatemala, and is situated on Fifth Avenue North. Built in the 17th century, it was used to connect it to the Santa Catalina convent of cloistered nuns to move from one building to another without going outside. A clock at the top was added afterwards in the Central American Federation in the 1830s.

If you are not a fan of Catholics stay away during Easter as is really crowded!

Has a lot of of restaurants around it.

One of the most visited places in Antigua.