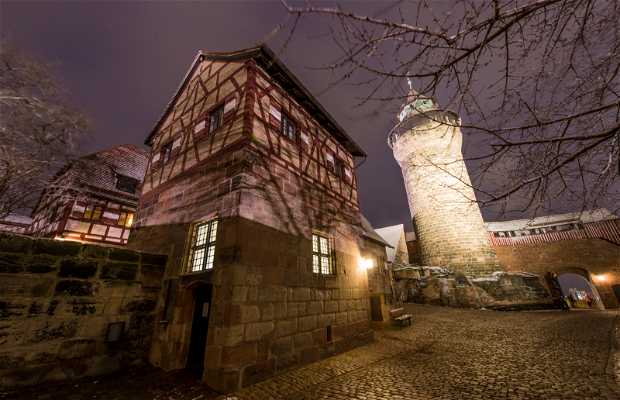 I'll give you a tour of old Nuremberg and show you a little of this beautiful medieval town !! Its old town is home to many historic buildings, scattered within the wall. Its dimensions are 1.77 kilometers squared, huge for a medieval town. The emperor Heinrich III ordered the construction in 1050, erected on a great imperial rock fortress (Kaiserburg) where a governor defended the commercial interests of the crown.

All German sovereigns lived there, between the years 1050-1571, it was Emperor Charles IV; and celebrated many festivals here and imperial diets like "Golden Bull." We decided in the afternoon to visit the Imperial Castle, a €6 ticket allows entry to the castle and museum. A large tower of heretics, on the east side houses the double chapel; the above for the emperor and the court with beautiful marble columns - the one below for gentlemen. Here are the remains of an altar, with four late Gothic style figures and beautiful remains of the ceiling in the upper chapel. The ladies' chambers (Kemenate) to the west across the courtyard decorated with shields, these were very damaged by bombs in World War II.