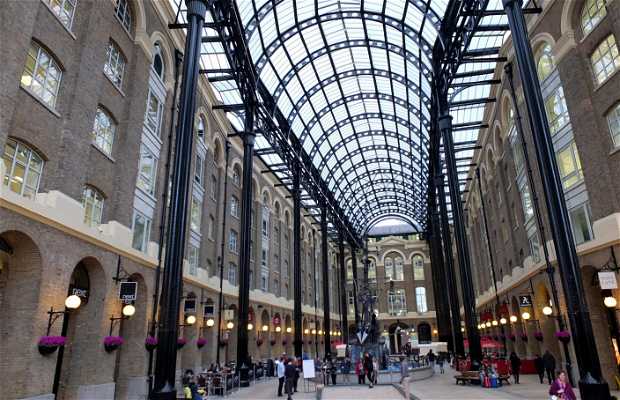 Reminiscent of the colonial era

A shopping mall next to the Thames. Converted from one of London's most famous springs. After the industrial revolution, London could not accommodate so many ships and charges in the city center, so a port was built closer to the sea, and the old docks were no longer useful. The Old Hay's Wharf (Pier) was built in 1850, and received goods from around the world, the delivery point of the city. Now renovated in an old style, reminiscent of the colonial era, when species, exotic teas and other products came from India and the Caribbean. In the 1900s, it was renovated, to make a covered gallery, with luxury shops.

This is one of the docks of the Thames now converted into a covered square with several cafes and bars serving bagels. A pleasant stopover near to the mooring place of the HMS Belfast. Ideal for having a coffee and contemplating The Navigators, the sculpture work of David Kemp.