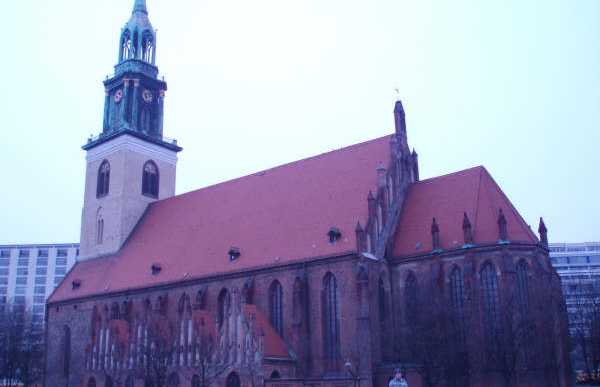 Most visited in Berlin

This church is one of the most visited in Berlin as it's very close to the Red Town Hall and TV Tower (Toothpick). It has undergone several reconstructions and changes, most of the current structure is XV-XVI century. This building, which was surrounded by buildings before today, is lonely in the shadow of the "Toothpick" because of the destruction Berlin has suffered. Its interior is a very interesting, European Gothic with baroque touches in the pulpit and the altar. Overall it's a very beautiful church worth visiting and it's usually surrounded by groups of the urban "Gothic" tribe that are

Oldest church in the city

St Marienkirche (St Mary's church) is in Berlin, in a place that has no name, formed behind Alexanderplatz and the Bauhaus avenues and leading to Museum Island. No one knows exactly its age but it's mentioned in writing in 1292. The church was Roman Catholic but during the Reformation became Protestant. Along with St. Nicholas Church it's the oldest church in the city and the original building can be seen in certain parts, but most was rebuilt in red brick church. Before the war it was in a densely populated area that now has formal buildings and shops. It's now the headquarters of the evangelical