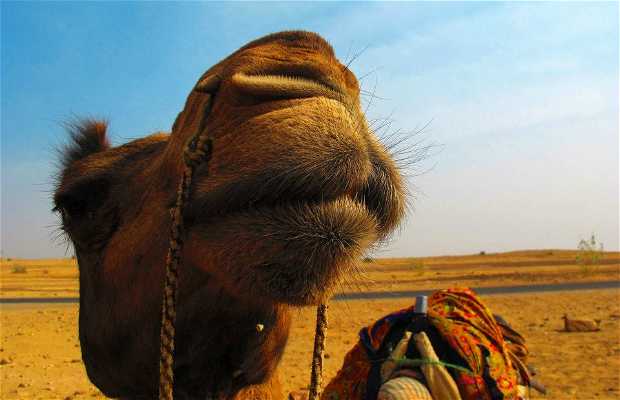 The Thar Desert is a large sandy region in the northwest of India and east Pakistan. Far from the preconceived idea of ​​what may be a desert, there are wild camels roaming the Thar, herds of goats, donkeys and the people's cows. It seems as if between the people here and their way of life have had an unbreakable bond for centuries, except in those areas which have been exploited by tourism which seeks precisely that,something that is genuine. It is a pity then to find plastic bottles in the dunes, as if this were a Eurodisney that forgot to install some bins. We were on 'Safari' riding a dromedary camely, which rather proved to be a trip to see the sunset at the Thar Desert.

Camels in the Thar desert

First thing in the morning in the desert of Thar. aftering passing Bikaner, we find a group of camels in Kolayat finalizing preparations before leaving for Jaisalmer. We stop and have breakfast with them and asked them what they are carrying and they tell us that they are carrying grain to the breeding center, and preservation of the camel domestication in Jaisalmer. They tell us there are three types of camels: The region of Bikaner and Udaipur smallish size and Jaisalmer, something bigger with abundant hair on the ears and dark skin tones. Although somewhat shy, they show us a special interest in appearing in the video, they do not believe that it will steal their soul.

After the storm came the calm. After a night full of experiences, such as a sandstorm followed by torrential rain, the land was peaceful. Sleeping under a sky filled with stars. Silence. Peace. And waking and seeing the landscape changing in colors. Camels took us back to town.