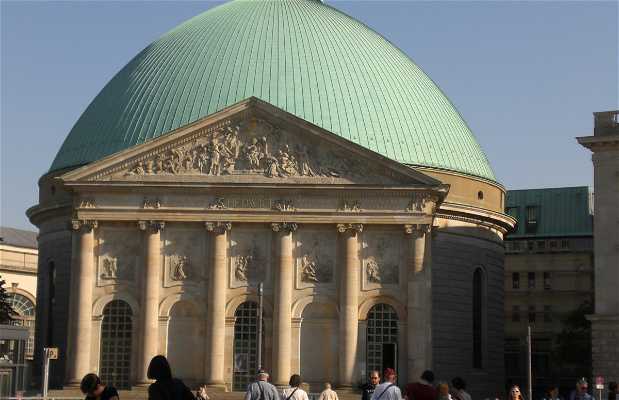 Built in the eighteenth century by the Prussian King Frederick the Great and he officiated it's opening in 1773. The Cathedral was dedicated to the patron saint of Silesia and Brandenburg, Saint Hedwig of Andechs, to commemorate the arrival of Silesian Catholic immigrants to Brandenburg and Berlin. It was completely destroyed in 1943 by bombing and was rebuilt 1952-1963. After the night of 9/10 November, 1938, Bernhard Lichtenberg, dean of St. Hedwig since 1931, prayed publicly for Jews and the next day he was imprisoned by the Nazi government and died on the way to Dachau concentration camp. In

St. Hedwig's is Berlin's Roman Catholic Cathedral on Bebelplatz, at the end of the beautiful Unter Den Linden. It was built in the eighteenth century by the Prussian Frederick the Great and the inauguration was in 1773. The cathedral is named after the patron saint of Brandenburg, St Edwig of Silesia. It's famous for its open position in favor of the Jews just before the ascent to power of the Nazis. Bishop Lichtenberg was taken to jail by the Nazis for having prayed for the Jews and was killed in a field, his remains are buried in the cathedral. It completely burned down in 1943, during an aerial