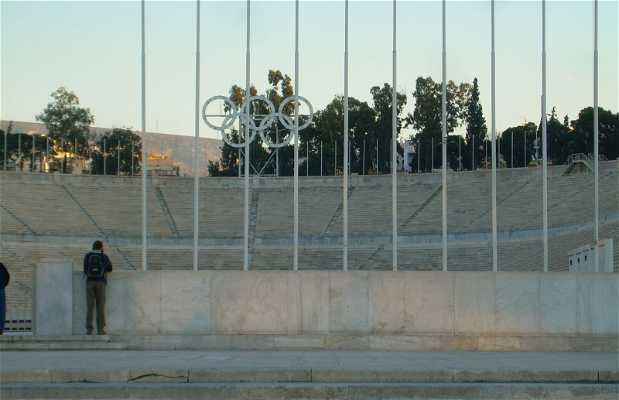 I thought back for a moment to 1896 and imagined participating in the Olympics, but the stadium is much smaller than any now as then everyone stood up and cheered the winners. I was impressed with the simplicity of the stadium and of course, the symbol of the Olympics, the five Olympic rings. At the entrance you can see four stones carved with all the Olympics history from 1896 to the present. Some interesting information. The I Summer Olympic Games were held in Athens between 6 and April 15, 1896 and King George I of Greece opened it. 241 athletes participated male (no female participation) from 14 countries, competing in 9 sports and 43 specialties.

Really this stadium is better known as the Panathinaiko and not as the Athens Olympic. The interesting part of this stadium is that everything is cast in marble, it is beautiful. When you enter they ask you for your language and you get an audio guide. In various parts of the stadium are numbers from 1 onwards. You have to go following them and activating and stopping the audioguide. It is very practical, I really liked the story without having to pay more for it than the basic entrance fee. I recommend to go on foot do not be scared because, it is on a big hill which is peaceful.